Video of the protest clearly shows participants both condoning the recent wave of terror in Israel, which has taken the lives of 14 Israelis, and calling for violence against the Jewish people and Israel. In both Arabic and English, protestors called for “intifada” (referring to campaigns of intensive violence), said Jews were “maliciously scheming to violate the status quo on Al Aqsa,” and stated that they would “never stop resisting” and “defend Al-Quds [Jerusalem] and Al-Aqsa with our souls and our blood.”

These are thinly veiled threats against the Jewish community based on lies about how Israel fulfills its responsibility for security on the Temple Mount. The event was promoted by several anti-Israel groups, including Samidoun – an organization with ties to the Popular Front for the Liberation of Palestine (PFLP), a Canadian-designated terrorist entity. 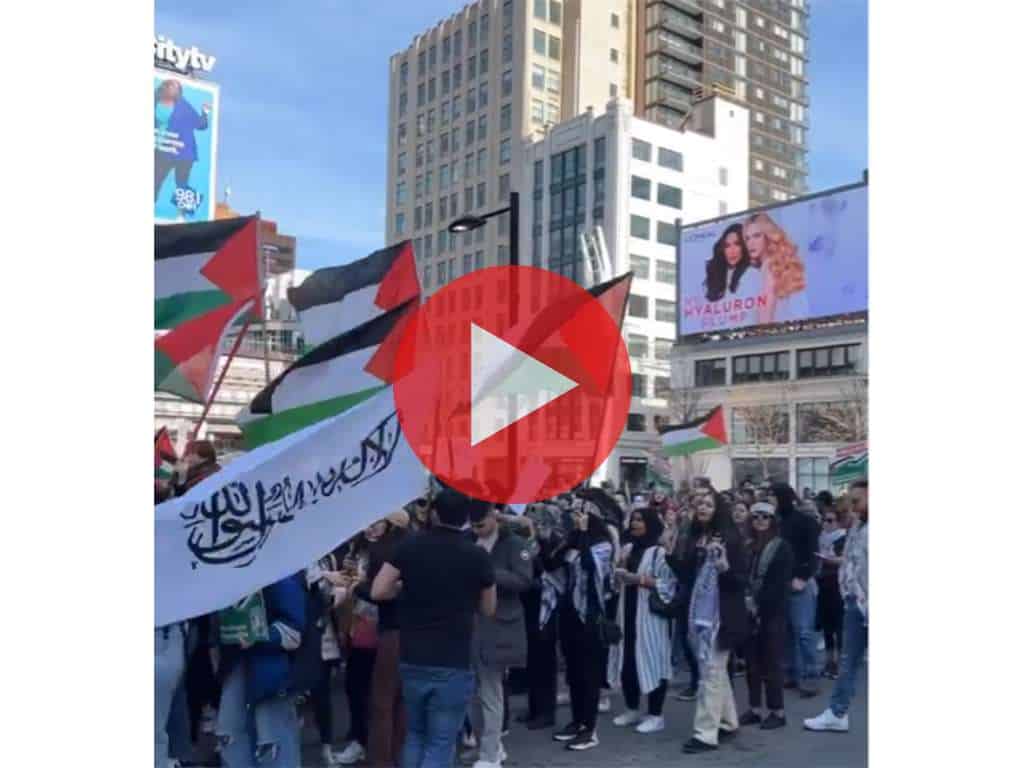 In addition, protestors promoted Hamas lies including a blood libel against Jews, claiming that Israelis are trying to “Judaize Islamic holy sites” and are advocating for the “complete destruction of Al-Aqsa Mosque.” This is a serious attempt to escalate the violence based on lies. The protesters further attempted to erase Jewish history by claiming that there is “no evidence” of Jewish ties to the Temple Mount, which, given the historical record, is an absurd attempt to deny the Jewish people their history.

Chair of CIJA’s National Board of Directors Gail Adelson-Marcovitz stated,

“We are deeply concerned, disgusted, and infuriated by the incitement to violence made at an anti-Israel rally in Toronto where protestors called for ‘intifada’ (violent uprising). We are equally alarmed by the apparent involvement of terror-tied organizations, which should be of concern to all Canadians. This hate rally is particularly troubling given that, later this week, Jewish communities around the world will pause to mark Yom HaShoah (Holocaust Remembrance Day). Our security team is in close contact with law enforcement and working with our Federation partners coast to coast to ensure the safety and security of our communities.”

“CIJA is registering its concern with Toronto Police Services regarding incitement of hatred against an identifiable group. In the context of rising antisemitism and the upcoming Al Quds Day in Toronto, Jewish Canadians are reasonably uneasy about a potential increase in violence at home. There is absolutely no justification for calls for violence in Toronto, or anywhere in Canada, no matter the cause.”

The Centre for Israel and Jewish Affairs (CIJA) is the advocacy agent of Canada’s Jewish Federations.