It hasn’t been that long since I last reached out, yet so much has happened – not only another election in Israel, but also the steady stream of antisemitism with which we have become, unfortunately, all too familiar. It seems that, every week, there is a new tale of anti-Jew hate percolating on social media and beyond.

West (or Ye) and Irving are now best known for posting some of the most widespread and hurtful antisemitism we’ve seen from public figures. Both men used their significant platforms to spread hateful rhetoric targeting Jews. Then we saw their hateful speech spill over to real-world actions – most notably a disgusting banner hanging from a California overpass while people brandished Nazi salutes to the highway drivers below, and the words “Kanye was right about the Jews” illuminated on buildings in Jacksonville, Florida.

Their comments generated widespread media coverage. Many spoke out against the blatant Jew-hatred displayed by West and Irving, and, in the resulting backlash, both paid a financial cost, losing contracts, partnerships, and sponsors. They were condemned by many of their fellow celebrities on social media, including with a popular graphic that made its way into many people’s feeds – Jessica Seinfeld’s I support my Jewish friends and the Jewish people.

All this was followed up by a “tongue-in-cheek” opening monologue last weekend on Saturday Night Live by Dave Chappelle. It has received very mixed reactions. And, while we shouldn’t expect celebrities to establish society’s moral compass, it’s not asking a lot of them to at least use their platforms to push back against antisemitism, not give it more play.

But the news is not all negative!

Manitoba and Alberta both recently joined four other provinces in adopting the IHRA definition of antisemitism – a huge step forward in identifying antisemitism and recognizing its manifestations. At the municipal level, Vancouver City Council has just done the same – following through on a campaign commitment by the new Mayor and the majority of elected Councillors from the A Better City party (ABC Vancouver). 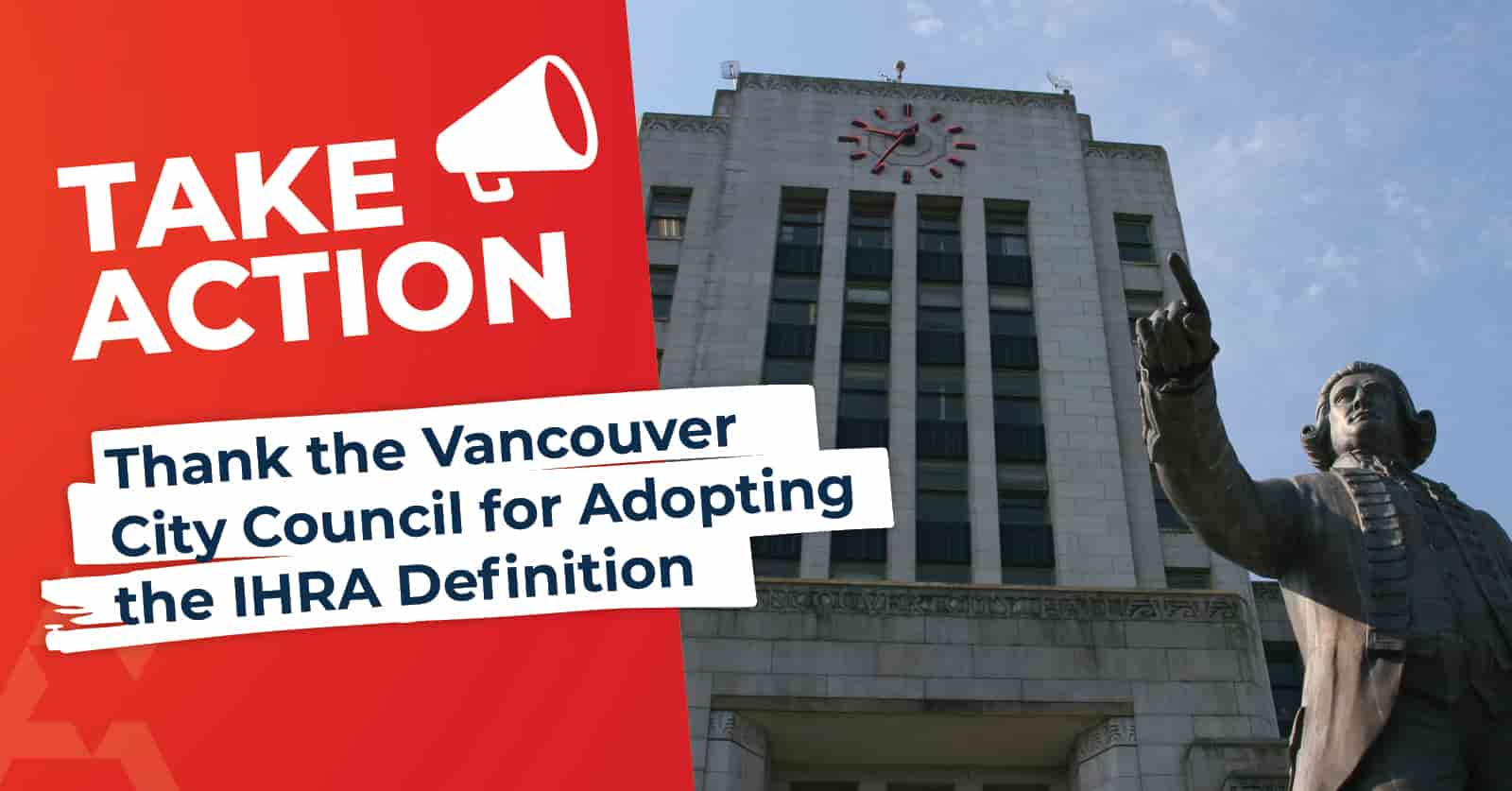 The IHRA working definition of antisemitism provides policymakers, law enforcement, and community leaders with a tool to identify, understand, and combat contemporary forms of antisemitism in public life, the media, the workplace, the religious sphere, and – importantly – in our schools.

Why does this matter? Last year, in Ontario alone, there were on average at least two antisemitic incidents in schools per week. More frightening, over 90 percent of all those antisemitic incidents occurred in Grades 7 and 8, at such a formative stage in a child’s life. We know that most hate is rooted in ignorance and, therefore, that one of the best ways to combat it is through education. 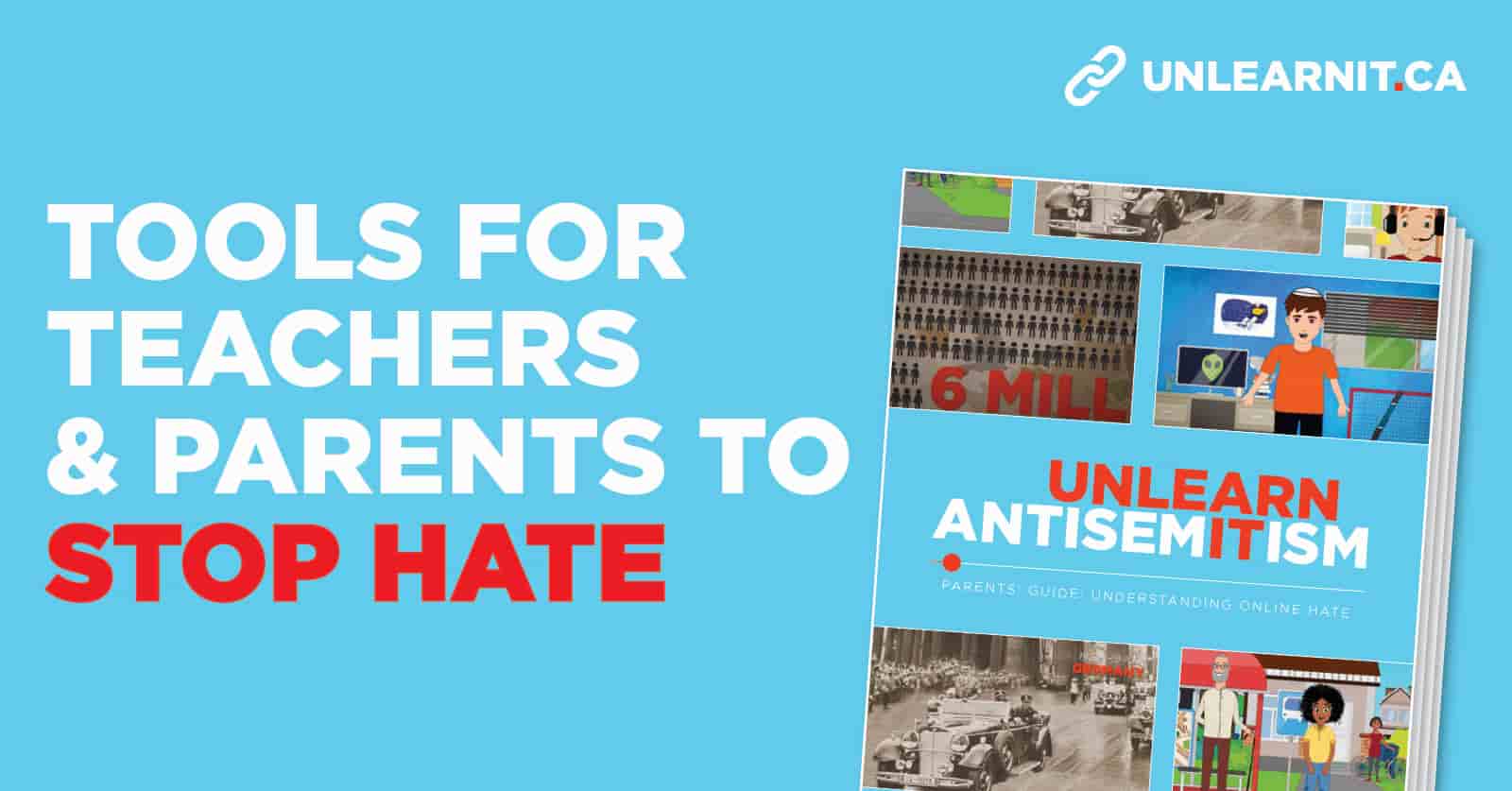 To address this trend, CIJA, in partnership with the Toronto Holocaust Museum and Facing History & Ourselves Canada, created Unlearn It – an online resource hub for teachers and parents to learn about, identify, and take action to address antisemitism. With short educational videos centred on Canadian students’ real, lived experiences of antisemitism and online hate, and with discussion guides to frame constructive, courageous conversations at home or in the classroom, these tools can be used proactively – or reactively when an incident occurs. Launching this month and endorsed by Ontario’s Ministry of Education, the program is already piloted in several schools. We hope that this resource will become a beacon for parents and educators across the country who are invested in protecting children from online and real-world hate and radicalization.

But CIJA isn’t alone in working against antisemitism. In Ottawa, we saw what just one person can do to help inform our own community – and the broader public – about steps we can all take to combat antisemitism. Lisa Levitan is an Ottawa-area teacher who took time away from her career to organize Rise Up Ottawa! earlier this month, an event that featured Jewish students from the Ottawa region recounting stories of the unprecedented hate they have recently faced at school. Hundreds of people came out to participate, engage, and support these brave students. Maspik!, the grant program whose mission is to foster creative and innovative approaches to combating antisemitism in Canada, was proud to offer financial assistance to the event. Mazel tov to Lisa for her hard work making it such a success!

From one successful conference to the next, I attended the ADL’s Never is Now conference in New York City. With 2,000 participants listening to speakers and participating in workshops, there was something for everyone – including our own Richard Marceau on stage as a panelist! And, of course, next week Hamilton Jewish Federation will host #nomoreantisemitism International Conference, again sponsored in part by Maspik!. 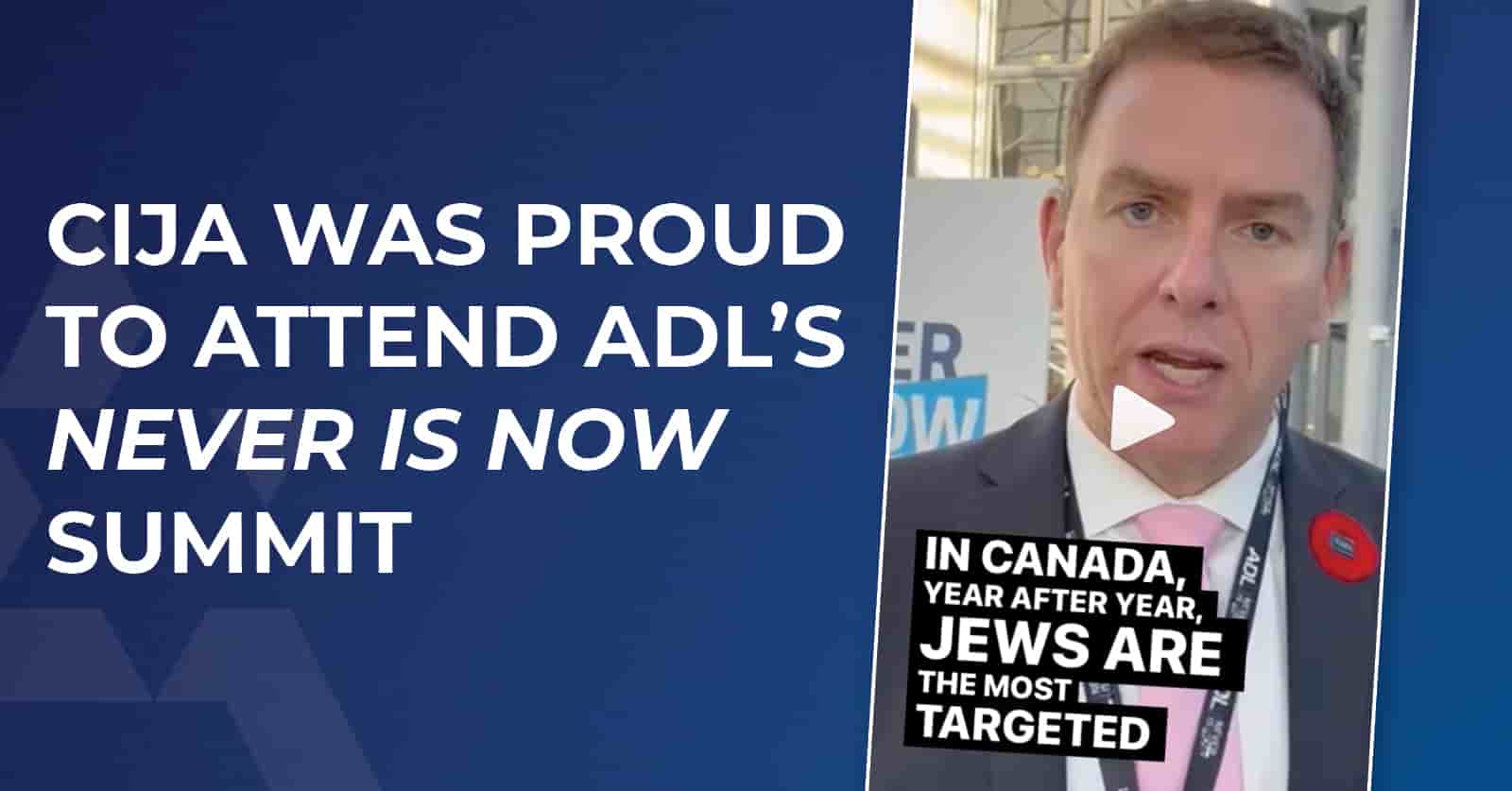 While that’s some of what has happened on our side of the world, many of us have also been focused on events in Israel. They wrapped up their election, and Benjamin Netanyahu will have the opportunity to form the next government. Pundits are divided on whether he can assemble a coalition based on the demands of some potential partners, and many have expressed concern about the spectre of a role that may be afforded to Ben-Gvir. At the same time, there are reports of secret talks and the potential of a National Unity government forming. CIJA will continue to track developments as a coalition begins to form and the makeup of the next Israeli government becomes clear. 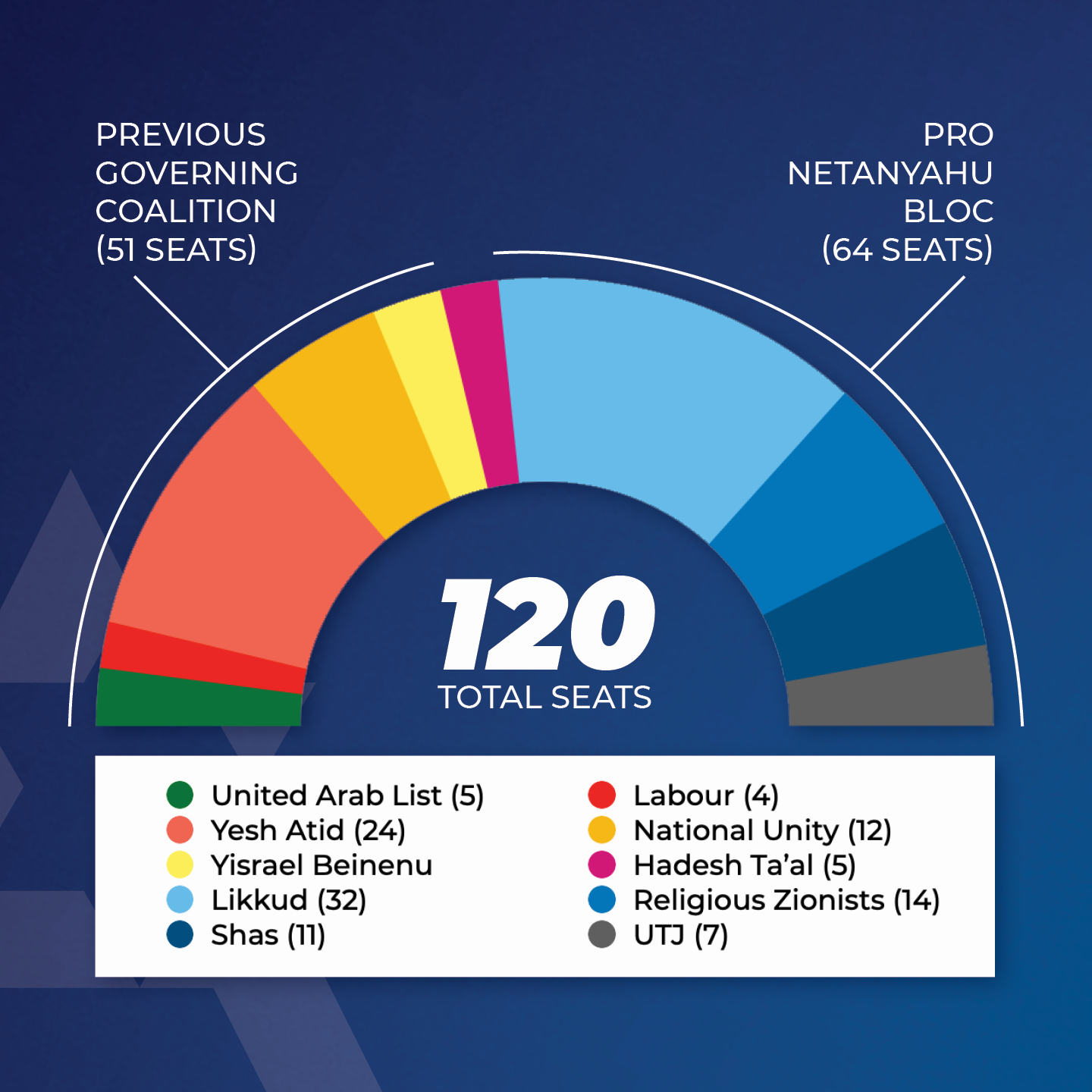 As we wait for the results, I would remind our community of the recent words of President Herzog: “The vote of the Israeli people should be respected,” and “The firm, vital connection between the State of Israel and North American Jewry will not, and should not, be compromised, whatever the result.”

And, finally, having just returned from an incredible mission to Dubai, Abu Dhabi, and Israel, I wanted to share with you what I witnessed: the spirit of tolerance and cooperation and the very real promise of a new path forward in the Middle East created by the Abraham Accords.

The Abraham Accords allow for normalizing diplomatic relations between Israel and the UAE, Bahrain, Morocco, and Sudan. They are a stabilizing force in the region, creating economic and political opportunities and sowing seeds of peace, a potential that is not just encouraging but truly inspiring. Peace can exist between Arab nation neighbours and the Jewish homeland of Israel, and it doesn’t have to stop there. It truly was a moment of awe as I reflected on the potential for partnership, diplomacy and even allyship, talked to official representatives and local Emirates and, as a Jew, freely walked the streets of the UAE, proudly wearing my Magen David.