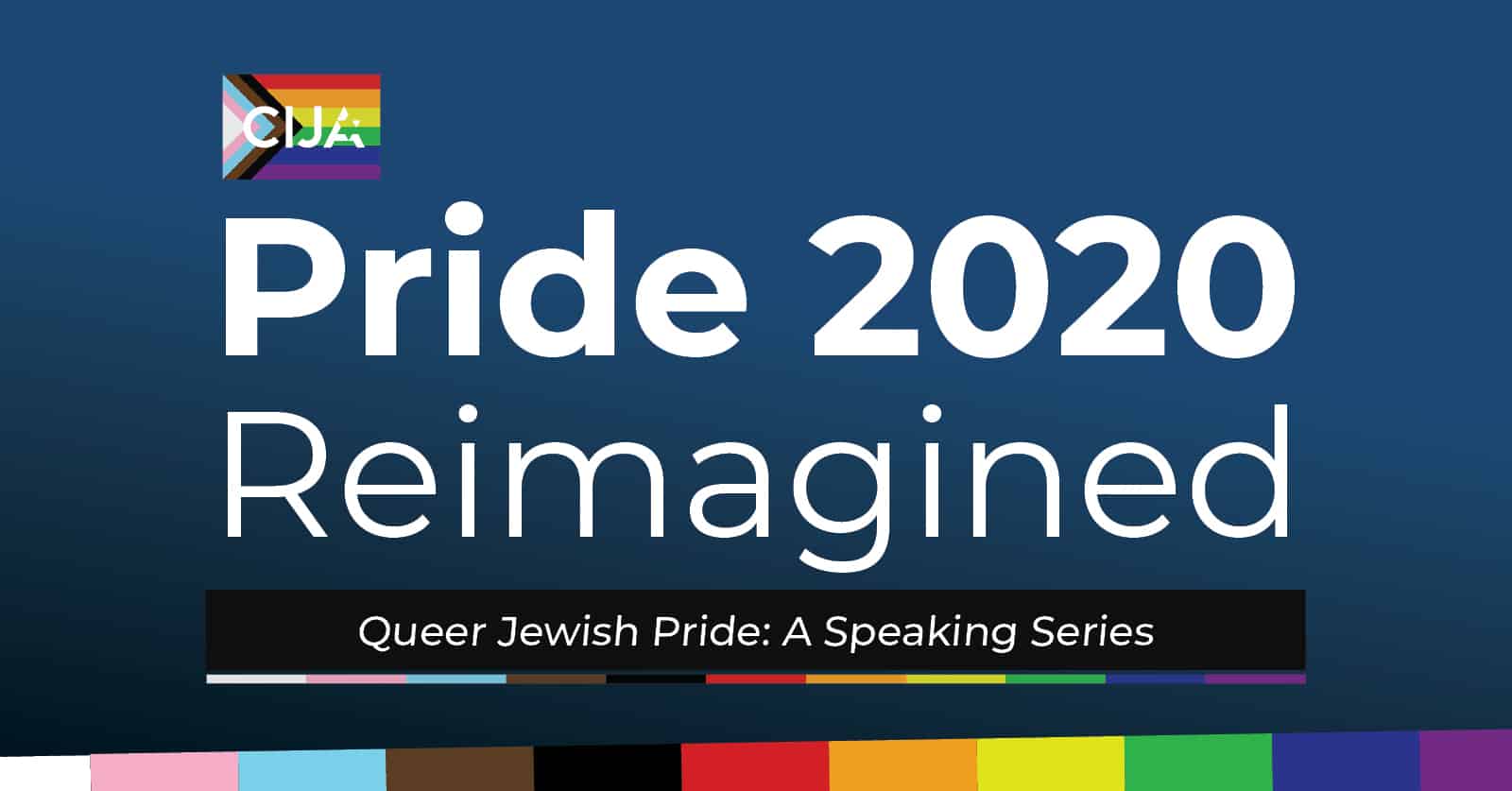 Although this year might be different, our unwavering commitment remains the same. We are showing up to amplify and celebrate queer and trans Jewish voices, experiences, and identities.

We invite you to Pride Reimagined 2020: a series of engaging discussions, interviews, keynote speeches, presentations, and personal stories. A huge thank you to our diverse lineup of supporting organizations and meaningful Pride partnerships. This was a true collaboration and we are proud to be a part of it. A time to learn, a time to celebrate, a time for Queer Jewish Pride! A Speaking Series.

As part of its human rights commitments, CIJA has been proudly active in Pride festivals across the country for many years. Taking place throughout the summer and from coast to coast, Prides are the perfect occasions to celebrate the diversity of our Jewish community, to stand in solidarity with our LGBTQ2+ family and friends, to share the Queer Jewish experience, to be counted in the fight against discrimination and to loudly proclaim that #LoveIsLove.

Footsteps, Netflix's One of Us and Her Story

Premiered on June 25th for Pride Toronto’s 2020 Virtual Festival and as part of CIJA’s Queer Jewish Pride: A Speaking Series.

Chani Getter (she/her, they/them) grew up in an ultra-orthodox Hasidic Jewish home in Rockland County, NY, and at 18, with barely a high school diploma, found herself in an arranged marriage. 5 years and 3 children later, Chani left her husband and as a single parent, began a journey of self-discovery. While her parents initially supported her decision to leave her husband, Chani’s decision to get her driver’s license and buy a car was a deal-breaker which led her family to disown her and her children. While it may have seemed that she was truly on her own, she never felt alone. Today, having mended fences and reconnected with her family of origin, Chani is a proud, out gay parent, and a spiritual leader. Since 2007, Chani has been facilitating a monthly support group for LGBTQIA women in NYC. In 2013 Chani joined the staff of Footsteps, an organization that helps individuals leaving ultra-orthodox Judaism. She uses her skills to support members going through divorce and custody issues through the Family Justice Program. Chani is featured as a counsellor in the Netflix Original documentary, One of Us, which follows 3 people in their transition out of insular Hasidic Communities. This conversation discusses coming out, transitions (in many ways) with children, finding space in the Jewish community, how we show up and integration of gender identity and expression.

Brought to you in partnership by CIJA, Pride Toronto and UJA Federation of Greater Toronto and Footsteps

Lesbian Activist and Ottawa Rabbi, Dara Lithwick (she/her), and Rabbi Mike Moskowitz (he/him), Scholar-in-Residence for Trans and Queer Jewish Studies at CBST in NY (the world’s largest LGBTQ synagogue) bring forward an interactive, thoughtful discussion on Pride, responsibility, COVID-19, the current time and social space we find ourselves in, and how allyship is predicated on a broken system.

Brought to you in partnership by CIJA, Fierté Capital Pride, Congregation Beit Simchat Torah, and Jewish Federation of Ottawa.

This engaging webinar-style panel includes coming out narratives, analysis of self-identification, how we define ourselves in an era of polarization, insights into the tahini controversy (yes, a real thing!) when Arab-owned Al Arz Tahini company made a sizable donation to an Arabic-speaking LGBTQ hotline and was called for boycott, the varying landscapes of queer activism in Israel.

The panel seeks to holds intentional space for queer Israeli narratives that are excluded from the global Pride movement at large and are often erased from progressive spaces based on discrimination of national identity. These lived experiences are distinct and diverse. We welcome Jon (he/him), an Israeli-Lebanese Christian, LGBTQ+ Activist and public speaker, Muhammad (he/him), an Arab-Israeli, public speaker and LGBTQ social activist, and Danielle (she/her), a Jewish Israeli lesbian and activist in Jerusalem. Co-moderated by Amanda Pratt (she/her, Pride Winnipeg) and Jess Burke (she/her, CIJA).

Brought to you in partnership by CIJA, Pride Winnipeg, and Jewish Federation of Winnipeg.

Premiered August 16th as part of CIJA’s Queer Jewish Pride: A Speaking Series, and in celebration of Halifax Pride and all Prides across Atlantic Canada.

Justin (he/him) is a folklore undergraduate student at Memorial University of Newfoundland, based out of St. John’s, Newfoundland. Originally from Bishop’s Falls (NL), he grew up largely secular and assimilated from both aspects of his identity. By the time he finished high-school and moved to St. John’s, he was able to connect with both the Jewish Community, and urban Indigenous community. This conversation analyzes connection to the land, defining a spiritual practice, overcoming assimilation as stories are misplaced to the folklore section instead of the history section, language revitalization and living in truth.

Brought to you in partnership by CIJA and Atlantic Jewish Council.

Premiered August 23rd as part of CIJA’s Queer Jewish Pride: A Speaking Series, and in celebration of Vancouver Pride.

Dr. Alex Abramovich (he/him) has been an award-winning, internationally recognized leader in this area of research. He is an Independent Scientist at the Institute for Mental Health Policy Research at the Centre for Addiction and Mental Health (CAMH) and an Assistant Professor at the Dalla Lana School of Public Health, University of Toronto. His research focuses on preventing, reducing and ending LGBTQ2S youth homelessness in Canada and addresses issues regarding transgender healthcare; said research has led to ground-breaking practice and policy reform. In this dynamic video presentation, Dr. Abramovich shares both his own story of coming out as a trans man in an Israeli-Scandinavian household as well as his engaging, in-depth research.
Brought to you in partnership by CIJA, CAMH, Jewish Federation of Greater Vancouver, Jewish Family Services, NCJWC Vancouver, The Jewish Museum and Archives of BC, CJPAC, Hillel BC, Louis Brier, Temple Shalom, Or Shalom, Congregation Beth Israel, Canadian Associates of Ben Gurion University, Vancouver Talmud Torah, Richmond Jewish Day School, King David High School.

To download the resources mention in the video: https://bit.ly/3gjFcP5

Intersectional Approaches to Inclusion and Segmentation

This conversation comes from the perspectives of queer, Black, interfaith and interracial. Rabbi Sandra (she/her) discusses her ‘package’, segmenting of the self, antisemitism in Pride spaces, the experience of living at the intersection of anti-Black racism and antisemitism as a queer woman, being in a lesbian relationship that is both interfaith and interracial; she shares her journey in America’s south, personal stories, and sung prayers of gratitude and healing. 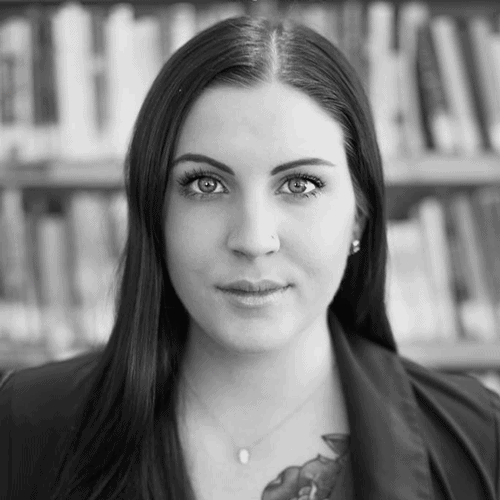 Jess Burke (she/her) is an activist who focuses on anti-oppression and the inclusion of antisemitism in anti-racism practices. She has worked extensively with Jewish and queer communities across Canada.

She identifies as an LGBTQ2+ Jew who advocates for sexual/gender wellness, womxn in politics, Jewish inclusion, combatting antisemitism in progressive spaces, intersectional feminism and digital communications. Jess has served on several national boards and committees, and has been the recipient of social justice awards. She loves running grassroots fundraising campaigns.

Jess is currently an Associate Director at CIJA in Community Training, Campus Advocacy and LGBTQ2+ Partnerships. Additionally, she has worked as an independent consultant and is formerly the Coordinator for the University of Calgary’s multifaith centre, where she developed, strategized, and facilitated intercultural, interreligious programming, support services, events, and dialogues. Jess is also an intercultural startup founder and program director, overseeing operations based between Mexico and Canada.

She has lived in Halifax, Toronto, Guadalajara (Mexico), Calgary, Los Angeles, and Israel. She identifies as equal parts Torontonian, Haligonian, and Israeli; currently living in midtown Toronto with her partner and their dogs, Blanket and Teddy.