Traditional celebrations of recent Passover seasons were certainly curtailed, or even canceled, by the pandemic. For those of us fortunate enough to have emerged from COVID-19 with our families intact, we now – finally – will have an opportunity to come together to celebrate the holiday as it should be – among extended family and old friends.

The limits placed on us by the pandemic, however, have not curtailed CIJA’s work. Ensuring increased COVID funding for frontline charitable organizations helping the elderly, ill, and all others among our most vulnerable was paramount in our advocacy to governments at all levels. Supplemental funds are never quite sufficient, but these extra funds were realized in federation agencies across the country.

The disturbing surge in antisemitism that ensued became another focus of our work. Last summer, as a founding member of the Canadian Coalition to Combat Online Hate, we organized a federal government-sponsored Emergency Summit on Antisemitism that brought together government, media, academic, and other experts in combating online hate that so often leads to real-life violence.

Connected to pervasive hate online is spreading distortion and even outright denial of the Holocaust. A poll commissioned by the Canadian charity Liberation75 showed that, of 3,600 students in grades 6 to 12, a shocking 33 percent were either uncertain about the Holocaust, thought the death toll exaggerated, or questioned whether the Holocaust even happened. In Ontario’s largest school board – and in others from the West to the Maritimes – incidents of antisemitism have begun to be reported almost weekly.

This kind of disturbing trend requires focused, strategic action. CIJA has received a grant to leverage the expertise of historians, teachers, and Jewish scholars to create a curriculum for Ontario middle-school students that will teach them about the Holocaust – and about modern-day antisemitism. Most recently, we have urged support for MP Kevin Waugh’s Private Member’s Bill that proposes Canada follow the example of other countries – including France and Germany – to make Holocaust denial an offense under Canada’s Criminal Code.

To spur discussion about what such legislation could do, CIJA hosted a national webinar about reasons to criminalize Holocaust denial, challenges posed, and what we can learn from jurisdictions where similar laws were enacted. With experts from Canada, France, and Israel espousing various perspectives, the discussion was informed, civil, and productive.

Discussion. Now that’s an area where Jews tend to feel both comfortable and motivated. And that brings me to the Pesach celebration awaiting us this year. Of course, we will delight in visits with our loved ones. Some of us will see children – or grandchildren – newly arrived or grown significantly since our last Passover Seder together. Many will have questions – not only the traditional four we ask annually, harking back to our historic connections to Israel, but also questions about being Jewish today, in Canada.

We think Jews in communities large and small have lots to talk about, and we want to facilitate engaged, thoughtful discussions responding to four more questions we’ve proposed for this Passover. We propose, this Passover Seder, that Jewish families and friends think about the issues CIJA, as the advocacy agent of the Jewish Federations across Canada, has been prioritizing. Download 4 More questions here. 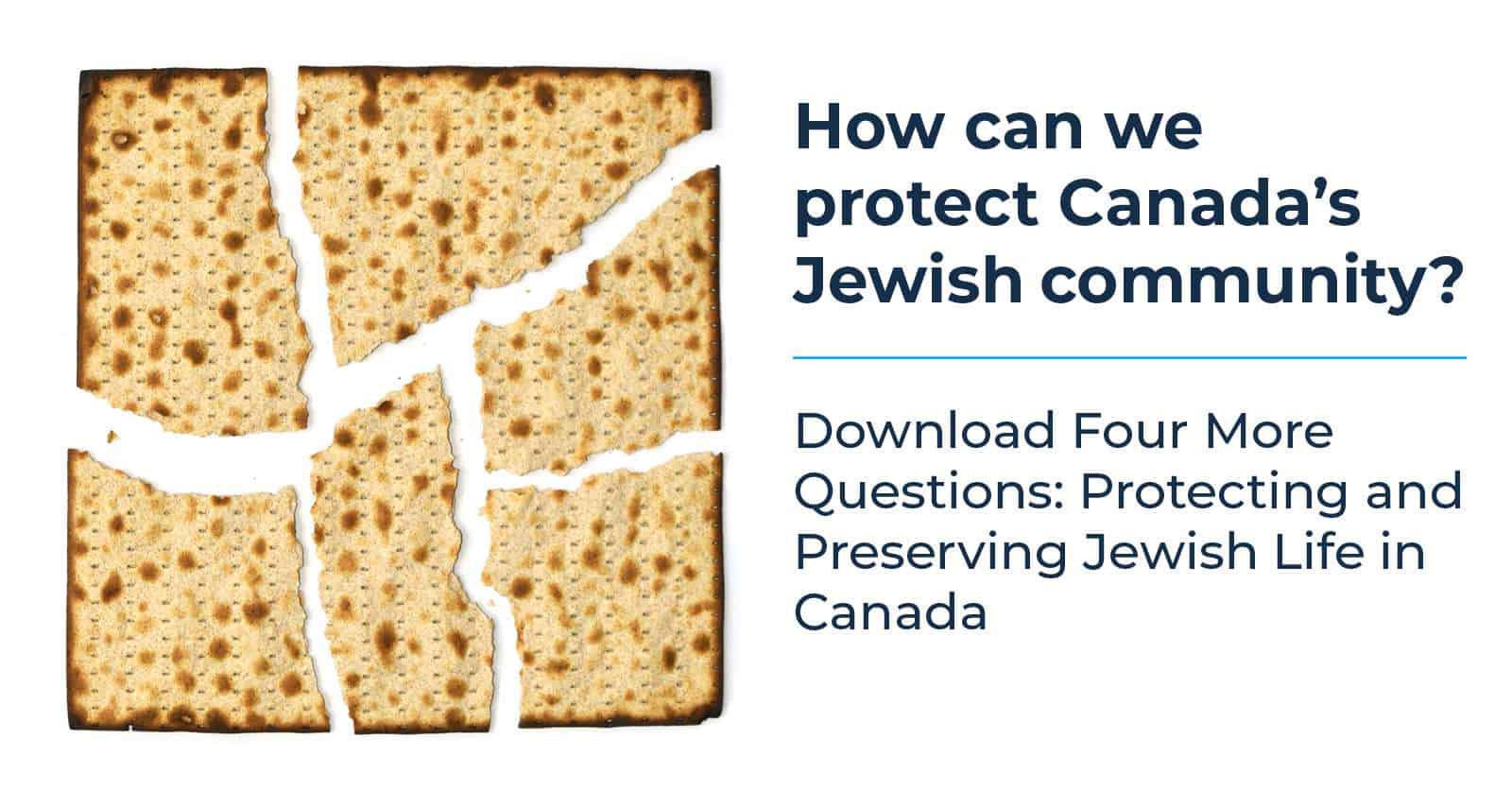 More background – and suggested responses are available at cija.ca/4morequestions. Looking at increased denial and distortion of the Holocaust, our most recent enslavement, how can we stop Holocaust denial and distortion? In the realm of online hate and antisemitism, we remember numerous historic efforts to destroy the Jewish people. What can Canadians do to combat online hate and antisemitism today? Turning to community security, as a once-enslaved people, we ask, what does a safe space for Jewish Canadians look like? And, as we solemnly intone ‘Next year in Jerusalem,’ how can we express the significance of the land of Israel in our Jewish Canadian identity?

That’s a lot. But that’s what we are up against, even living in Canada, one of the safest places for Jews anywhere.

As we gather this year, whether part of a small family, an extended clan of young and old, or among friends, let us celebrate the joy of our survival and how, together, we can work to shape our future.

May your Passover be a peaceful, thoughtful, and happy one.  Chag Pesach Sameach!

Judy Zelikovitz is Vice President, University and Local Partner Services at CIJA, the Centre for Israel and Jewish Affairs.

About Judy Zelikovitz
VP, the Centre for Israel and Jewish Affairs (CIJA) | Opinions are mine | RTs are not endorsements