There have been important developments this week on issues we know you care about. How do we know? Because you told us. We receive hundreds of messages from community members just like you about these topics. Please keep the emails coming! We want to know what issues are capturing your attention, and more importantly, we want to hear your ideas about tackling them. 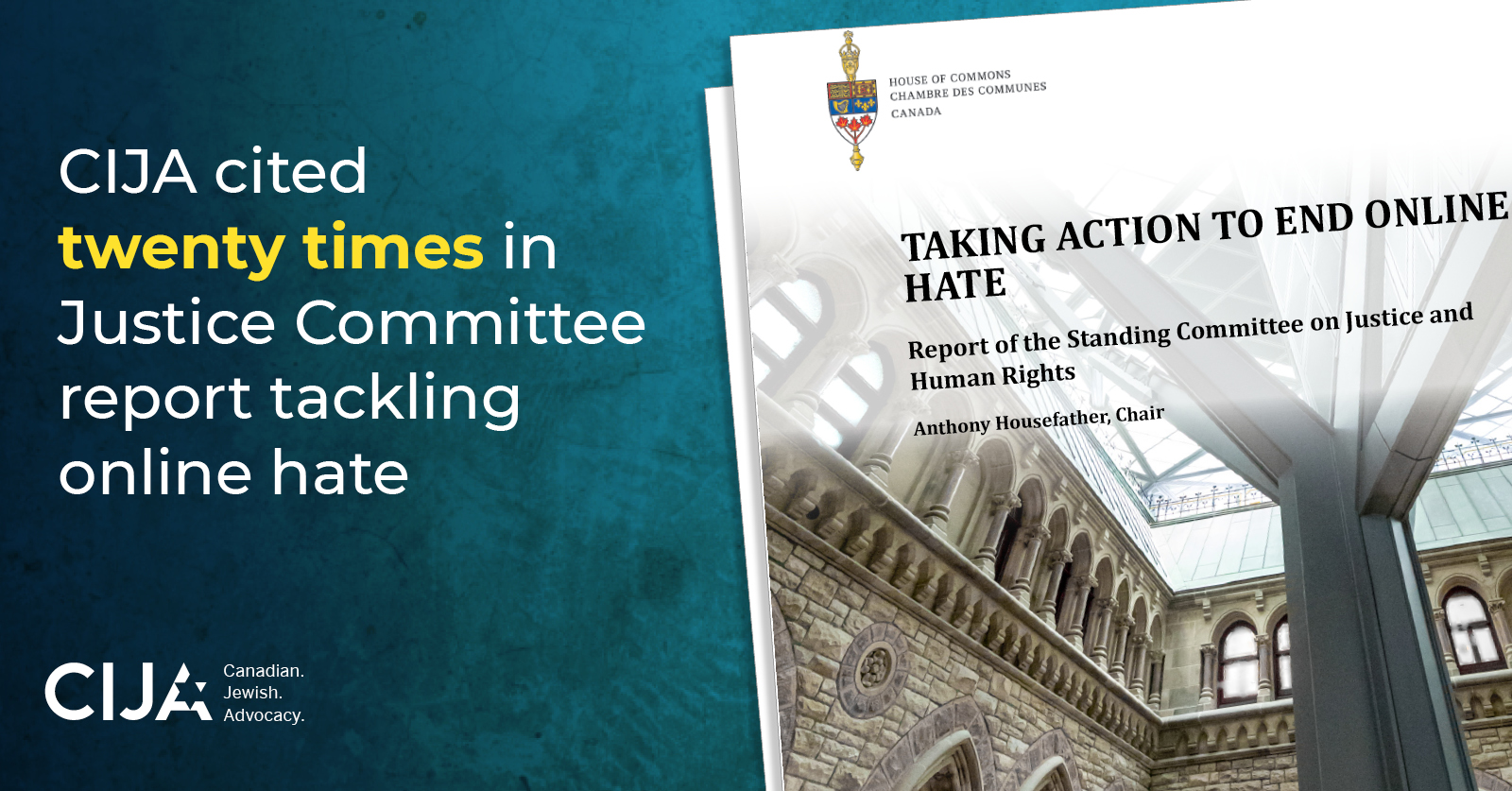 Online Hate.The fight against online antisemitism has grown more complex and intense recently. Experience shows that online incitement often fuels real-world violence, which is why CIJA mobilized thousands of community members just like you to call on the House of Commons Justice Committee to investigate the issue as the first step in creating a national strategy to combat online hate and radicalization.

This week, the Committee released its ground-breaking study calling for action. The testimony of CIJA’s President and CEO, Shimon Koffler Fogel, is cited twenty times in the report – more than any other expert witness who appeared before the committee. In fact, the report’s first sentence notes that CIJA’s campaign to call for this study – which many of you participated in – was an inspiration for its launch.

Many of the report’s recommendations precisely mirror our policy positions which were informed by thousands of conversations with constituents like you. Our position included a call for a multi-pronged, Canada-wide strategy to define, track, prevent, and – when necessary – use legal tools against those inciting hate online.

Bill 21. In the late hours of Sunday evening, following a marathon session in the National Assembly, the Quebec legislature passed Bill 21 which prohibits the wearing of religious symbols by teachers and state officials like police and prison guards.

We believe deeply in the secularism of the state, though believe just as firmly that secularism is an organizational responsibility, not a personal one. The secularism of the state is not dependent on the outward appearance of individual public servants. This law is discriminatory and violates cherished principles of religious freedom. It will limit employment opportunities for Jews and other religious minorities in the parapublic and public sectors. 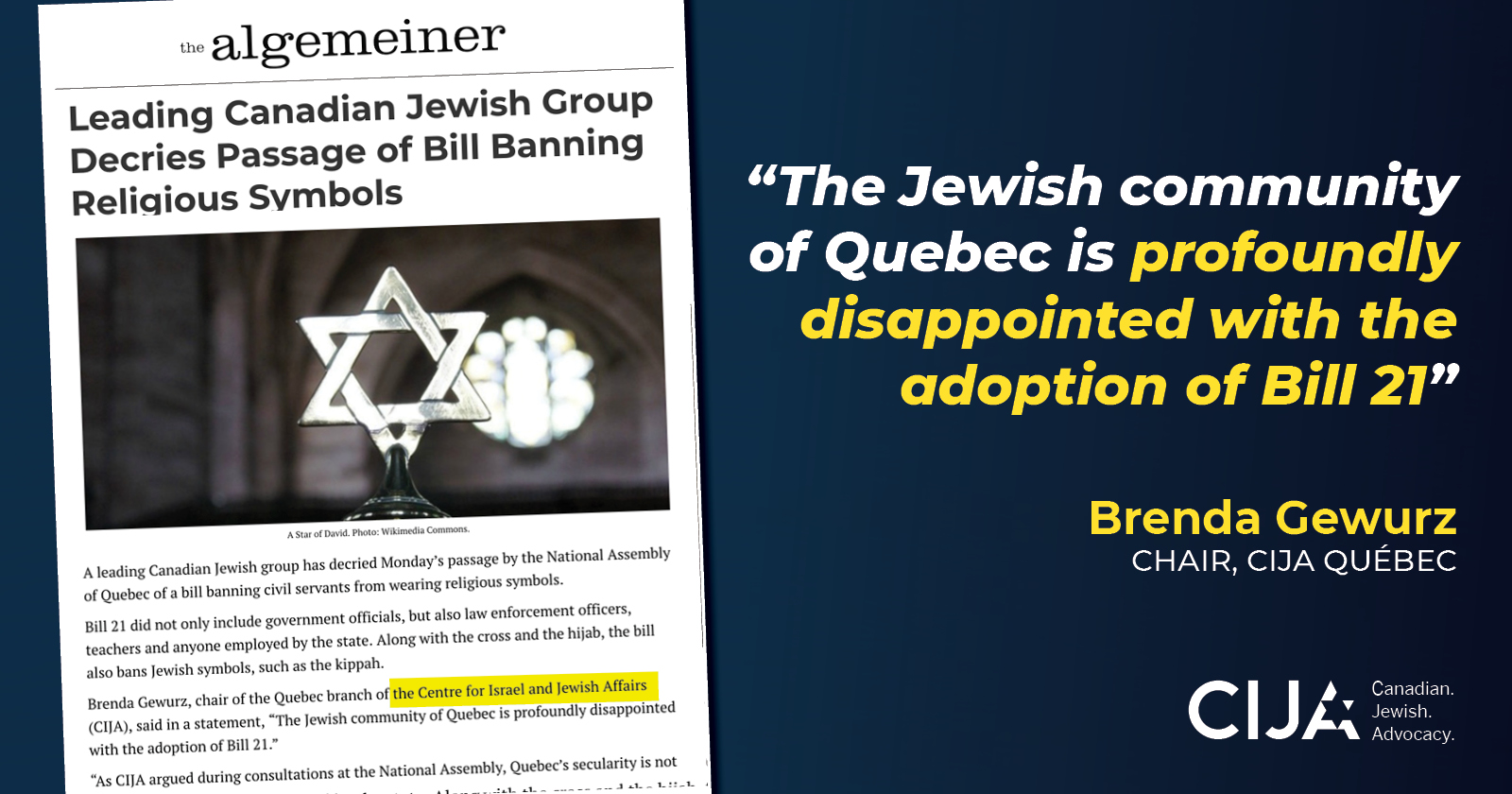 As such, we are profoundly disappointed with this law and have shared our position clearly and repeatedly with the government of Quebec, including during formal consultations. CIJA was one of only two religious minority groups invited to testify and we firmly articulated our community’s concerns. We take some comfort that the government incorporated several of our suggestions, such as the inclusion of a clause that protects individuals who are currently in the public sector.

However, the law remains disturbingly vague and its enforcement promises to be arbitrary and subjective. We will be monitoring its implementation very closely and we will continue to respond as necessary. We will also be calling for a thorough review of the law once the notwithstanding clause expires. While the bill has passed, this issue is not going away – and our efforts to uphold religious freedom in Quebec will continue.

You can read our testimony here and find our statements on Bill 21 here and here.

While Bill 21 primarily impacts our community in Quebec, it also has the potential to impact the discussion outside the province. What happens in one jurisdiction often affects debate taking place elsewhere. We will continue to engage with all levels of government in all jurisdictions about the core Canadian value of religious freedom, and we won’t be shy to ask for your help delivering the message to policy makers.

Next week, we will be issuing a special edition of this newsletter discussing an important policy development. Please keep an eye out for it as it will include an opportunity for you to engage on an issue that we know you care deeply about: antisemitism.